For the second time, the institutions and organisations that call Park Leopold their home will join forces and open their doors to welcome visitors of all ages for a community event. Locals and visitors alike can discover the free programme packed full of activities - from guided tours, to exhibitions and performances, there is something for everybody to enjoy. At the end of a day full of exciting discoveries, sit back and enjoy an inspiring cultural programme in the European Parliament Citizens’ Garden.

Nestled in the heart of the European quarter, leafy Park Leopold provides the backdrop for a variety of cultural centres, museums and political institutions that will take part in the one-day event including:

Park Leopold, named after the first two Belgian Kings of the newly born state, has a stunning and long history that you can discover during dedicated walking tours linking the European Parliament to its historic neighbourhood.

Housed in the original building of the Brussels-Luxembourg train station, Station Europe bridges the area's past as the Leopold Quarter and its present as the European Quarter. It serves as a starting point for guided tours on the day of the event.

The House of European History is located in the former Eastman dental clinic, which was financed by a donation in 1931 from the US-business man and philanthropist George Eastman, the inventor of the Kodak camera, to host a dental clinic for disadvantaged children. Today it hosts the House of European History’s permanent exhibition on six floors as well as the temporary exhibition "When Walls Talk!".

The Solvay Library and the Lycée Jacqmain used to be the Institut de Physiologie, which hosted the Solvay congresses, bringing together great minds from around the world between the two world wars. Why not follow in the footsteps of Einstein, Bohr and Curie and take a picture on the stairs overlooking the park?

At the Museum of Natural Sciences visitors can explore human nature, evolution and biology, as well as the largest Dinosaur Gallery in Europe. The Museum of Natural Sciences has been a permanent fixture in Leopold Park, for the past 150 years.  On Park Leopold Day the museum will be taken outside into its garden with lots of space for fun activities for all ages and especially for children.

Discover the Wiertz Museum in the heart of the Leopold district and get dazzled by this impressive piece of Belgian art history! The museum, which has preserved its original atmosphere, was once the home and studio of painter, sculptor and writer Antoine Wiertz (1806-1865), a somewhat controversial artistic figure of the Belgian Romantic movement. Since 1868, the Wiertz Museum has been part of the Royal Museums of Fine Arts of Belgium.

The garden of Wiertz’s former residence is now the Citizens’ Garden, thanks to renovation by the European Parliament. The garden is open to all and hosts a rich cultural programme with concerts, art installations and literary events.

Ixelles artists’ residency is a brand new cultural venue in the European district, which is dedicated to contemporary visual arts. The KULT XL Ateliers offers a new exhibition space and artists’ studios.

The Kiosk and Welcome point on Rue Belliard are brought to you by the European Quarter Management Association (Equama). Previously the paid entrance to the park, the ivy and lion reliefs decorating the brick kiosk buildings remind visitors of the park’s history as a zoo and botanic gardens.

The Eggevoort Tower is the only remaining part of the medieval estate, dating from the 15th century, reminding visitors of Park Leopold’s long history in the Maalbeek valley. This magnificent example of civil architecture is among the oldest and best preserved in the Brussels Region and has recently been classified as a historical monument thanks to the efforts of the Association du Quartier Léopold. 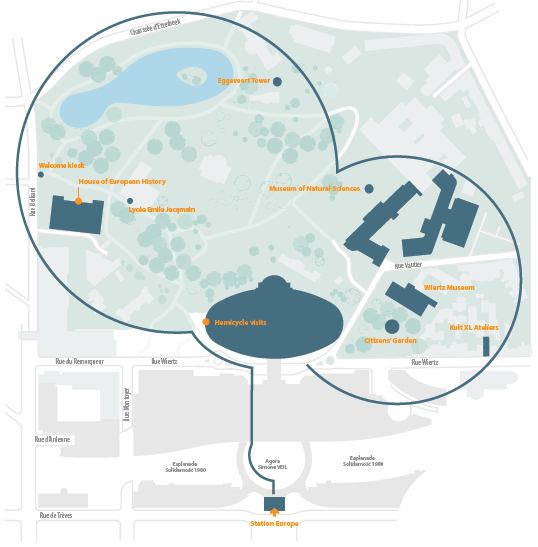 Download the map of the Park Leopold Day to find your way around!

In 1987, when the construction of the European Parliament headquarters in Brussels began, local residents came together to form the Association du Quartier Léopold (AQL). The AQL is concerned with the quality of life for residents in the quarter and is committed to protecting historical heritage, promoting urban diversity and an open public space. The AQL proudly supports the Park Leopold Day initiative which attempts to bring the European Parliament closer to the citizens around it.